Hundreds of years ago the hand-fans Ellie Arbuckle uses for tai chi would have had razor blades in them.
Now razor blade free, the forms and movements she practices are virtually the same as they were 100 years ago.

“It was originally developed by monks to defend to help them defend their temples,” she said.

“It’s a martial art which can be quite lethal, but is also predominantly about peace.”

Arbuckle was one of about 30 people practicing tai chi at the Japanese gardens in Brooklands Park on Saturday, as part of World Tai Chi Day.
Starting at 10am, New Zealand was the first country in the world to kick off the day and people in other countries would join in when the clock struck 10.
Arbuckle is part of the Taranaki Tai Chi Society and said Tai Chi Day was about connecting into the energy from around the world.

“Our motto is ‘strong as a mountain, move like a river’ which really summarises the tai chi philosophy quite well,

“It’s about being fluid but also strong.” 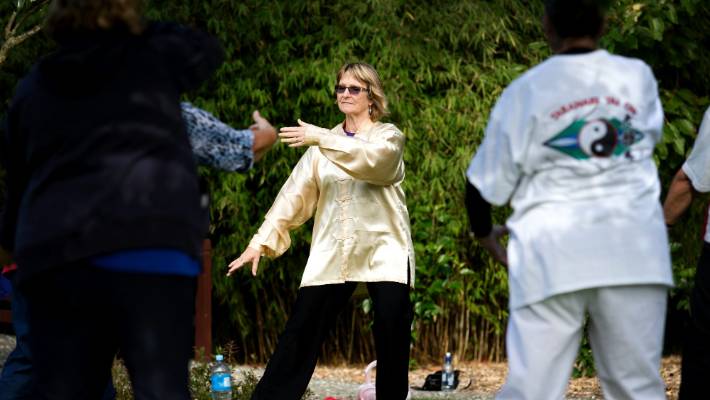 Principal instructor at the Taranaki Tai Chi Society Judi Lee said she had been running a Tai Chi Day class at Brooklands park for 10 years and the art was about both physical and spiritual self awareness.

“It’s quite similar to yoga and meditation in that regard.”

Lee said tai chi was based on Chinese medicine and sought to mentally relieve the body’s pressure points, called meridians.

“In the same way an acupuncturist uses needles to relieve those pressure points, tai chi uses the mind.
“Meridians are like veins of energy running through body and helps you pin-point and focus on them.”
Allie Bollard was at the Saturday morning class and had picked tai chi up again after a 15 year break.
“I find that it mostly helps by strength and balance,” she said.
“It feels good to get the energy flowing and you really do notice your energy levels are way higher after a class.”